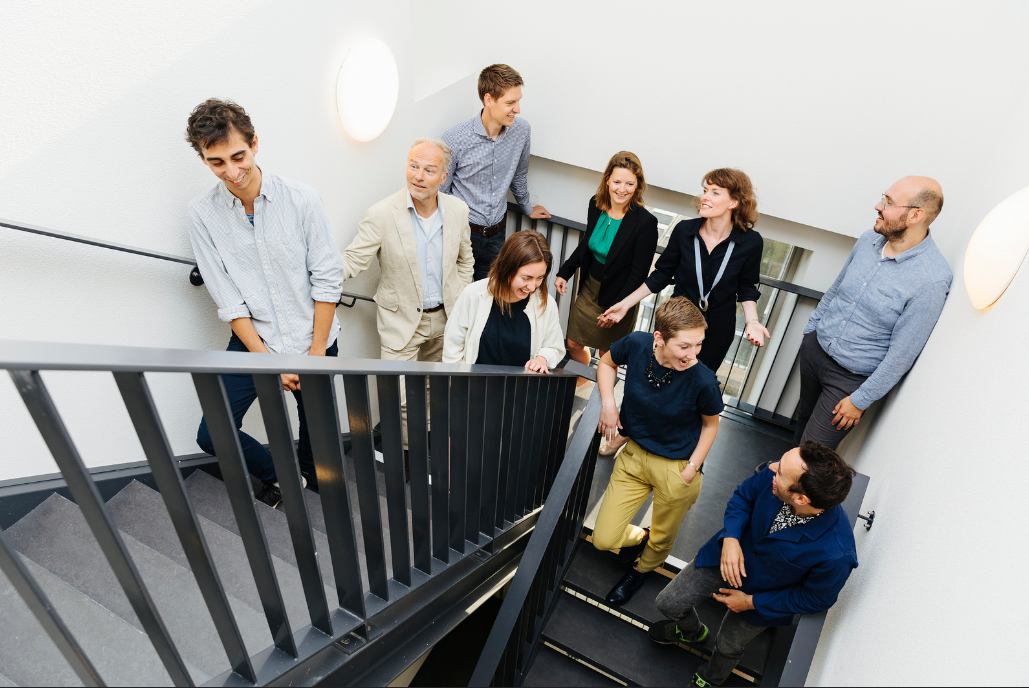 The Visual Methodologies Collective is a research group specializing in visual and digital research for social and cultural issues. Our interests lie at the intersections of visual culture, digital research, information design, media theory, data visualization, storytelling, and critical making.

We work with the Citizen Data Lab on participatory data practices. We study climate change solutions with the Digital Society School, Climate Cleanup and the Digital Methods Initiative. Within the Amsterdam University of Applied Sciences, we teach the Minor MakersLab, Issue Mapping for Fashion at AMFI (MA FEC), and more.

The Visual Methodologies Collective consists of researchers, designers, and developers and is based at the Amsterdam University of Applied Sciences, Faculty of Digital Media and Creative Industries.

The group is headed by Dr. Sabine Niederer, Professor of Visual Methodologies.

Sabine Niederer is Professor of Visual Methodologies and founder of the Visual Methodologies Collective at the Amsterdam University of Applied Sciences. She is specialised in the cartography of issues and online debates, through visual, digital and participatory research, with a special interest in climate change. In 2014, Sabine founded the Citizen Data Lab as a place to build collaborations between researchers, students, issue professionals, local communities, artists, designers and developers to work on participatory mappings of local issues. Sabine is programme manager of ARIAS, Amsterdam-based platform for artistic research and co-coordinator of the Digital Methods Initiative at the University of Amsterdam.

Carlo is a designer and researcher at the Visual Methodologies Collective, where he specialises in data visualisation for social research. He is developing methods to gather and explore nature-themed audio-visual collections from archives and online spaces, through the use of AI and participatory practices. He collaborates as information designer with the Digital Methods Initiative (UvA), where he contributed to studies on climate futures imagination, climate movements and fake news. Carlo designs teaching materials for educational programmes inside and outside HvA on how to use data visualisation and computer vision software in the study of social issues.

Marloes Geboers (Ph.D.) is a researcher at the Visual Methodologies Collective, based on the Amsterdam University of Applied Sciences. She is also affiliated to the Digital Methods Initiative at UvA since 2016. Her research blends traditional visual methods with digital methods in order to arrive at novel methodological protocols to study social media images. Her Ph.D. thesis centered around the communication of solidarity through social media images and, more in particular, explored questions around how platform’s affective affordances shape the visuality of war and suffering. She received her Master’s degree in political science and has a background in journalism.

Maarten Groen is a researcher and developer with the Visual Methodologies Collective at the Amsterdam University of Applied Sciences (www.visualmethodologies.org), where he also works as a lecturer in the Computer Science department (HBO-ICT). Maarten is interested in developing and researching tools that empower citizens. In the past, he has worked on projects involving open data, intelligent sensory systems and public screens. Maarten is also part of the Responsible IT team, lead by Prof. Nanda Piersma. He holds a B.ICT in Computer Science (from the Amsterdam University of Applied Sciences) and an MSc in Information Science: Human-Centered Multimedia (from University of Amsterdam).

Natalia Sánchez Querubín, Ph.D., is Assistant Professor and Coordinator of the New Media and Digital Culture MA program at the University of Amsterdam. She works on digital media research and the intersection of social media with health stories and social issues. She is author of the book Issue Mapping for an Aging Europe with Rogers and Kil (Amsterdam University Press, 2015) and has published on the topic of cancer and vlogging (Lancet Oncology, 2019), migration studies with social media platforms (Social Media + Society, 2018), and climate change and social media (WIREs climate change, 2018).

With her multi-faceted practice as a contemporary arts curator, moderator, (radio) DJ and broadcaster, Femke Dekker has long been an active member of Amsterdam’s cultural scene. Femke is artistic research fellow with the Visual Methodologies Collective in 2021-22, where she joins the project Tune In, Fade Out, with ImagineIC. She is part of the core team of Ja Ja Ja Nee Nee Nee, the online radio platform for visual arts and culture, has been affiliated as tutor with the Radical Cut Up department of the Sandberg Instituut, the masters program of the Gerrit Rietveld Akademie of Fine Arts and Design and currently teaches at the department of Interior Architecture and Furniture Design at the KABK, the Royal Academy of Art in The Hague. She also curates cultural programmes for festivals such as the annual Lente Kabinet in Amsterdam. Her independent practice centers around music culture and contemporary art, bringing together the work of emerging artists working on the crossroads of sound, installation and performance art and music.

Janine Armin is a writer and organiser based in Amsterdam where she is a PhD candidate in Art History at the University of Amsterdam. She received a Master of Arts from the Center for Curatorial Studies, Bard College and Bachelor of Arts from McGill University. As an organiser she has co-run several independent spaces in Amsterdam including SideReal (2017–19), looking at the undermined social movement of alchemical philosophy through music, writing and visual art. Armin is copy editor for many venues and publications including If I Can’t Dance, I Don’t Want To Be Part Of Your Revolution, Amsterdam and Afterall Journal, London. Among other positions she has been curator of publications at BAK – basis voor actuele kunst focussing on the FORMER WEST project and communism after 1989 and editor for Casco Art Institute: Working for the Commons, both in Utrecht. Her art writing has appeared in books and projects including Yael Davids: A Daily Practice (Van Abbemuseum, 2022), Social Life of the Record #2: Metal Ideas (Paraguay Press, 2014) and Thinking About It (Archive Books, 2014) and publications such as Bookforum and the International Herald Tribune. She is at work on a climate-fiction family-thriller.

Dan Xu is a creative researcher and maker, working in interdisciplinary fields of art and science. Most of her works explore the creative possibilities of AI in language and the perceptual interplay between sound and space. Grounded in a tinkering approach, her ideas often co-evolve during the making with the machine. Dan is currently working towards a Ph.D. with the Media Technology programme at Leiden University. At the Visual Methodologies Collective, she works with Andy and Maarten on reviving the interactive light installation ‘The Citizens’, to be placed at Marineterrein in Amsterdam, in a collaboration with AHK’s Artechlab and Culture Club.

Wouter was coordinator of the Visual Methodologies Collective and the affiliated Citizen Data Lab until January of 2021. He also worked as track owner at the Digital Society School where he focuses on data-driven transformation. He holds a BSc in electrical engineering and an MSc in Information Science from theUniversity of Amsterdam. At the beginning of his career he worked as a ground engineer in aviation. Facilitating projects with impact, working with data, and doing research on how data could help to empower people are the focal points in his research.

Research fellow, cli-fi project
Jessica is a Social Anthropology graduate (MA) from Goldsmiths University of London. She is a Digital Society School alumna for the spring semester of 2019, where she took part in the data-driven project ‘Right between our ears’, which investigated the communication surrounding climate change solutions in the digital realm. The project aimed at overcoming a perceived lack of consensus in the different visual and lexical registers used by the media, science and general public when addressing the climate crisis. She has joined the Visual Methodologies Collective as a research fellow on the cli-fi project for Winter 2019-2020, mapping climate fiction narratives in the arts, and learning more on how to tackle environmental urgencies through speculative storytelling. Among her research interests are media affordances and infrastructures, sensory practices enacted through digital technologies, and concepts of emotional contagion in the digital age.

Ruurd Priester (MA) was a Research Fellow with the Citizen Data Lab and later the Visual Methodologies Collective from 2016 – 2019. Trained as graphic designer, Ruurd is one of the Dutch pioneers in digital design, innovation and strategy. After many years of working with large organizations on their digital transition, Ruurd decided in 2015 to put his knowledge, experience and network to work for digital social innovation in the public realm. This has so far resulted in the publication Our online platforms on bottom-up urban innovation in the digital age, the cooperative online platform Gebiedonline and a new Master in Digital Design at the Amsterdam University of Applied Sciences. In 2017, Ruurd decided to focus on his deepest concern: climate change and the energy transition (from fossil to clean energy). In this effort he combines his fellowship with an active role in initiatives such as Climate Cleanup. Ruurd’s activities can be followed via his personal blog: ruurdsnotes.tumblr.com.

Loes is a researcher and educator who is interested in participatory practices at the intersections of art, technology and design. She is always wondering how we can make our work more accessible and inclusive. Loes brings a hands-on and experimental approach to dealing with data (the big kind, but also small data, no data or and so called thick data) by integrating her maker skills and artistic talents with her interest in real people and curiosity for their lived experiences. Loes holds an MA in Interactive Media: Critical Theory & Practice (Goldsmiths College, London), and a BA in Media & Cultural Studies (University of Amsterdam). She is currently also coordinator and lecturer of the Minor Makers Lab.